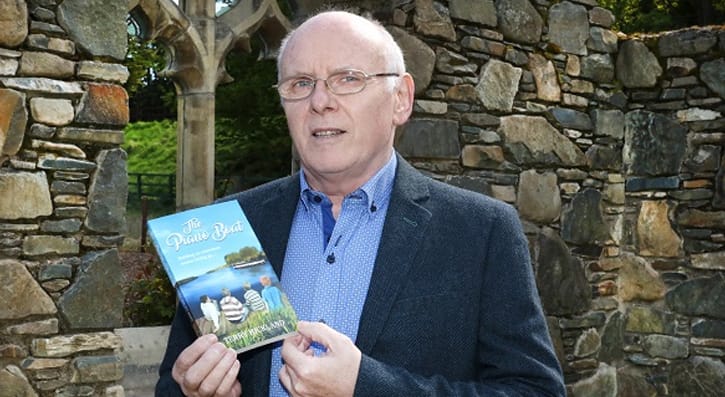 A South Eastern Regional College (SERC) Lecturer has published his second book which is being used by Tipperary Tourism to promote the setting of The Piano Boat.

Lecturer, Terry Hickland (61), from Ballies Mills, teaches Construction, Plant and Light Vehicle technologies and is based at the College’s Lisburn Campus.  He is proof that you are never too old to do anything and is full of entrepreneurial spirit.   He said, “The Piano Boat has drawn a lot of interest from the village of Ballinderry, on the banks of Lough Derg, in County Tipperary where it is set. I was delighted that Tipperary Tourism, with support from Failte Ireland, had commissioned a short film featuring a portrayal of the main character reading an excerpt from the book, to promote the area which is a stunningly beautiful part of the country. The book is also being appraised by the same team that made the tv series Ballykissangel."

Terry self-published his first book On Marian Place in 2016, a multi layered crime novel dealing with bribery, corruption and past war crimes. He said “The Piano Boat is completely different style from my first novel. This is a much gentler story set in rural Ireland in 1987, featuring a young boy whose days are filled with football, roaming the fields with his friends and helping his grandmother in her shop.  Following a tragic accident, The Piano Boat tells how two very different people find their way from grief and darkness back to hope.”

When asked how he got into writing Terry said, “I was inspired to put pen to paper after reading a biography by Ian Fleming and to learn how the idea for James Bond came about. I am a big fan of Swedish writer Henning Mankell who wrote the Wallander books. I guess they inspired me to write On Marian Place."

Undeterred with 30 refusals from publishers, Terry decided he would self-publish and following three print runs, has been enjoying steady sales on Amazon ever since.  He concluded, “My advice to anyone thinking of writing is to go for it.   It has been a learning curve for me, but I have upskilled in self-publishing, typesetting and even set up my own publishing house Charland - ‘Char’ from a well-loved pet poodle Charlie and ‘land’ from Hickland.   It is never too late to do something you want to do and as the saying goes, if you don’t try you will never know.”

It seems there is no end to talent in the Hickland family.   Terry’s wife Jacqueline, at one time a music teacher, works in retail and supports Terry with accounting and editing. Their son, Frasier, is completing his studies at the Royal Academy of Music in Dublin.

You can purchase The Piano Boat and On Marian Place by Terry Hickland on Amazon.