Your information is being saved, please wait.
Let us know you agree to cookies

Gold and Silver for Confectionery and Patisserie students at WorldSkillsUK Finals 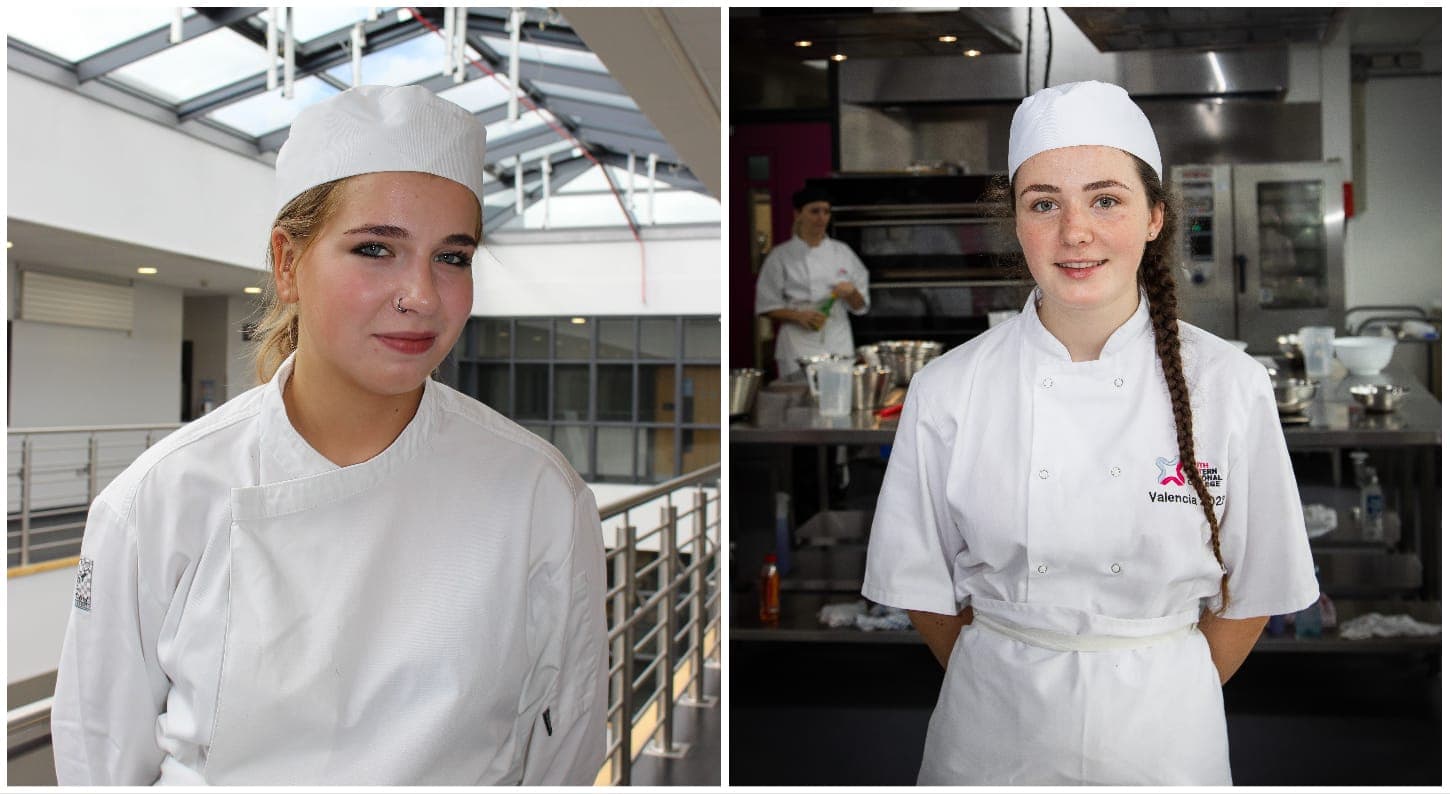 Two students from SERC have scooped Gold and Silver for their Confectionery and Patisserie prowess at the WorldSkillsUK National Finals.

Facing competitors from across the UK, Level 3 Patisserie and Confectionary student Marija Kuzaite (17) from Coalisland, was awarded a Gold Medal and Level 3 Hospitality with Events student Eimear McCarthy (18) from Portaferry, was awarded a Silver Medal in the Confectionary and Patisserie competition which took place in Belfast.

Speaking about her Gold Medal Award, Marija said, “It’s brilliant and I am absolutely delighted to have won a Gold Medal.   I think because I had had so much practice and tuition beforehand it wasn’t as stressful on competition days as I was expecting.   It was a case of knowing what I had to do and getting on with it. The time went really fast, but I got everything that was expected completed.

“I was shocked that I got Gold as my sugar showpiece - a red central column with blown balloons, ribbons and fireworks, all made only with sugar using different techniques, collapsed when I was putting it together.   Luckily, I had all the elements and was able to recover both myself and the showpiece and put it back together.   That was day one, so I really wanted to push myself with the pastries on the second day to ensure I picked up all available marks and I think that paid off with the Gold Award.”

Beside her sugar showpiece for the carnival themed competition, Maria produced three sorts of pastries for the afternoon tea comprising raspberry mousse with raspberry gel centre, a lemon sponge with sable base and mirror glaze: and a hot plated cherry and coconut Bakewell dessert.

Marija continued, “I wouldn’t have been able to take part without the mentoring and support from my lecturer, Ruth Doherty, who pushed me and encouraged me every step of the way, or without the support from my family - my mum and dad, like myself, couldn’t believe it and are so proud."

Silver Medallist Eimear, who also completed the Level 3 in Patisserie and Confectionery last year at SERC said, “The competition was a really enjoyable experience and although stressful, I enjoyed meeting the other competitors, the judges.  The support we had through Masterclasses with Master Pâtissier Florian Poirot, was magnificent - he even sent us a message to congratulate both Marija and I and to say how pleased he was which was very touching."

She added, “It was full on for about six weeks leading up to the competition - if I wasn’t in College, I was practicing at home - but I had an accurate time plan which helped me focus and complete everything required each day.”

Eimear presented mini-ice-cream cones, pasties with a lemon cheesecake filling and a raspberry gel; a coconut mousse inside a chocolate and coconut shell and a hazelnut tart with a toffee apple filling.   Her sugar showpiece consisted of a hollow poured moon shape centre column with ribbons, blown balloons and a pulled sugar spiral.   Both students also had to complete a mystery test, which challenged their skills in perfecting a chocolate collar with raspberry mouse and sponge with tempered chocolate.

Eimear concluded, “I couldn’t have done it without my tutors Paul Monaghan and Ruth Doherty. I would also like to thank my current tutors Paul Barr and Sheena Hunt for their support and flexibility.   My mum, dad and bother are all very proud of what I have achieved - I am still on dessert duty for Christmas dinner in my house!"

Both Marija and Eimear will have further opportunities to hone their skills in the coming year in order to achieve selection for the WorldSkills UK squad which will compete against teams from across the world in France in 2024. Lecturers Paul Monaghan, who teaches Eimear at Bangor Campus and Ruth Doherty, who teaches Marija at Lisburn Campus, worked together to prepare and mentor the students. Ruth said, “We are absolutely delighted to have two students win Gold and Silver.  They have worked so hard and put in long hours which is duly reflected in this amazing result, and I could not be any prouder of what they have achieved for themselves – it is inspirational.”

Paul said, “Eimear has done an amazing job in both training and preparation for the final.  It has been fantastic to see her work and dedication rewarded with a Silver Medal.

He added, “Both girls have done themselves and SERC proud and we are delighted that they are number 1 and 2 in the UK. They have such talent and drive, and an exciting career ahead of themselves. It has been such a pleasure to train and mentor them and watch them fulfil their potential.”